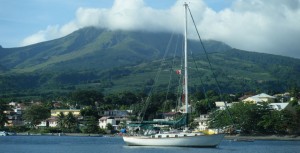 After searching from Key West, FL all the way up the Atlantic coast to the Maine border, and viewing 40 or so boats (seemed like anyway), she was a breath of fresh air. She was the last boat on the list. In fact the “list” had been exhausted and I was grasping to find another good boat to look at. She was unavailable to look at on the way up, but I did find her price had just been dropped to where I could start negotiating.

She’s an outstanding boat, but she had just enough wrong with her that I thought I might be able to afford her. After much negotiating, she was mine! Not perfect…, but just what I needed!

Since before I got my first boat, Emily in 2008, my goal had been to cruise the Caribbean. I reckoned it would take two years just to figure out where I wanted to hang out. After spending more time in the warm, blue waters, I wanted to go to Europe. All of it interests me, but high on the list are Amsterdam, in which I spent several weeks in 1985, and a couple days again in 2004, and the Canals of France. A Brit I met while looking for my first boat told me how beautiful they were and piqued my curiosity. Another major goal was to cruise Turkey before they join the EU. The way things have been going politically I needn’t rush. It should be EU-free for awhile yet. Turkey is supposed to be what Greece was like before the EU increased regulations. Beautiful cruising, amazing architecture, culture, and people.

Now that I’m doing more research and talking to more people who have been there, I’m finding more places I want to be. A gentleman in Grenada told me about the Caledonian Canal between the east and west coast of Scotland, and Loch Ness is a part of it. I visited Inverness and Loch Ness in 1985 and the thought of being there in my own boat is inspiring. (though I needn’t try Haggis this time). I made the Fringe Festival in Edinburgh, Scotland in 1985, by pure serendipity, and I want to do that again, so somewhere in mid- August 2015, I expect to be in Edinburgh! Young actors from all over the world come there to perform plays, etc, and it’s very dynamic.

I’m also learning Holland has a great network of canals and there is much more to see there. In fact I don’t expect to make it to France the first summer. Between Ireland, England, Scotland, Wales and Holland, one summer will not be nearly enough! Fortunately, though I feel compelled to leave for the cold season, I plan to leave the boat thereabouts and return in the Spring, and repeat until satisfied. Summer = play in Europe. Winter = work in Virgin Islands. All in all, I think it’s a pretty good plan!