Some big winds were forecast, up to near 40 knots, so I decided to go up the Aulne river to Chateaulin to avoid them, and get my first experience in a French canal. Traveling the canals is one of my big goals; a way to really experience and immerse myself in French culture (and food, and wine)
I anchored inside the Rade du Brest, a big estuary, for the night to get an early start.
When I started in the morning, I didn’t appreciate how far I was from the mouth of the Aulne and it took a couple hours to get there. The flood tide began before light, so I should have started earlier.
The waterways remind of North Carolina, because of the mud flats, the cattails, and all the people fishing. Just upriver from the mouth I passed under a beautiful Cable-Stayed bridge that is a work of art. There is another of similar design closer to Brest but this one over the Aulne curves, so the two columns supporting it come from one side and rise at an angle making it like a sculpture. Gorgeous!

A few more turns up the river I found wet storage of some warships. About 4 cruisers, 2 of something a little smaller than destroyers, and some smaller craft are in mothballs, much like the Liberty Fleet in the SF Bay. 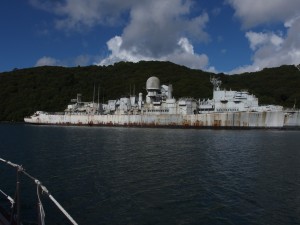 It was ebbing when I was still miles away and after sliding through some mud a time or two, I ended up buried in it a mere half mile from the lock. It was so soft the keel sank 3-4 ft down in it, so I barely heeled at all. I was pretty hungry since I didn’t have time below to make a proper lunch, so I was kind of glad for the respite. After lunch, I took the dinghy up to the lock and explored a little, then setup the camera for a time lapse of the tide coming in. 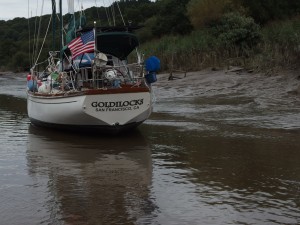 The flood was pretty late so I refloated not long before dark, and after grounding several more times, made it into the lock. Of course it was too late to pass through the lock so I tied up and slept there. About 0400 I found low water in the lock was well below my waterline and the boat leaned against the wall, the hull high and dry.
It wasn’t until nearly noon the tide was high enough for the lock keeper to pass me through. That all went smoothly and I motored up the river, under a Roman-style aquaduct. Too new to be Roman but a beautiful bit of construction. It was raining like hell, so could have been better conditions for sight-seeing, but the storm was why I came. I passed Port-Launay, a tiny town with one bar and no cafes that I could see. About a mile on was Chateaulin and the end of the line for me. There a low bridge kept me from going any farther. A lock next to a barrage just past it allows the short boats through. If my mast were down I could get through, but my draft, 1.8m, would not let me go far. 1m is the controlling depth farther up, and the book recommends depth sounders to anything drawing more than 0.8m. The barrage allows the fish to swim up river.
The lock is hand cranked, and all free passage. For a 60euro deposit, you get a windlass handle, and can take your boat through the locks many miles  up the river. I think it goes all the way to Rennes, and may connect to other canal systems, but my map only shows this, the Finistere Sector. Of course it does connect to Nantes, farther south in the Bay of Biscay.

2 thoughts on “Aug 24, Chateaulin, France: First Time Aground in France, in the Nantes-Brest Canal”