Hoy, solo. It’s a good weather window to leave Cork Harbour, Ireland, so off we go. Not too early a start as the ebb isn’t until about 10:00. Motor out through the many boats in the river. Sailing is popular here if the density of the moorings is any indication. It is a pretty prime spot for keeping a boat and the Royal Cork Yacht Club is a nice place to start from. Huge harbour, so plenty of protected waters, and the ocean close by for offshore endeavors. I filled up diesel at the Yacht Club. About 90eurocents/Liter. Quite good. Turned out about 1.45/L in Brest.

I had to motor to get out of the ship traffic area first, and there was hardly any wind to start, but not long after leaving the harbour my sails were set and drawing. SE toward Isles of Scilly, about 135nm. 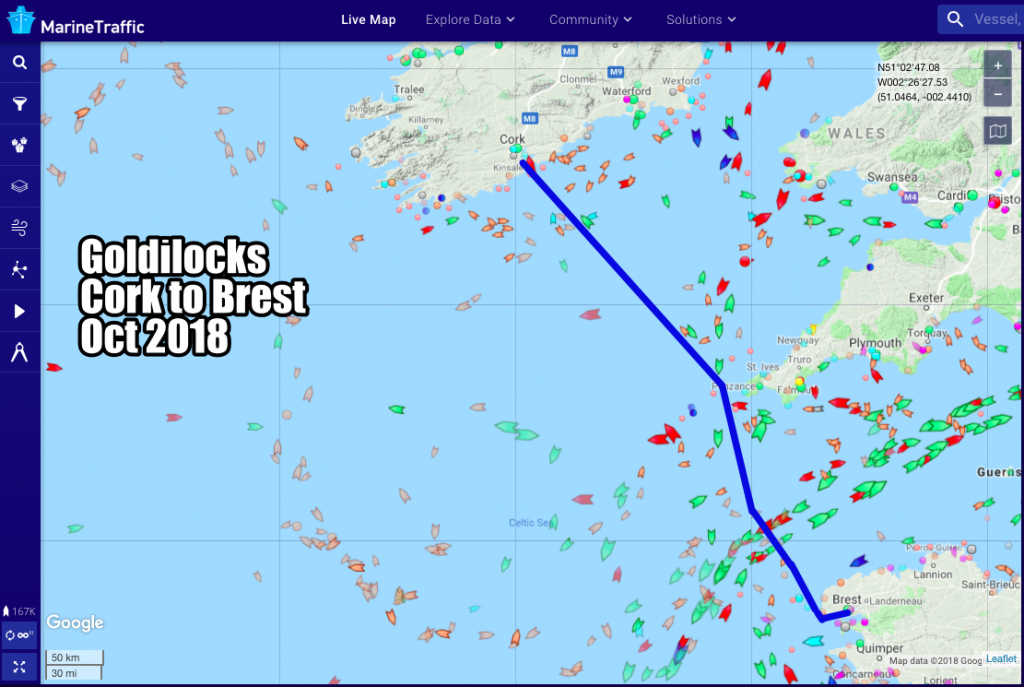 Sky is clear with some clouds. Cool, about 10C and light winds. Occasionally wing and wing, but sometimes motorsailing. Dolphins came to play!! In fact they came several times. They are smaller than I see in the western Atlantic, and grey with white underside. Nicer looking than the “Brownfish” of the North Sea, as the Dutch call them. Some of these were very playful and were slapping the water and sometimes each other with their tails. They don’t seem as organized at sharing my bow-wake as some I’ve seen, and I couldn’t detect a pattern to their movement, but it’s always good to see them. Sometimes 7 or 8, and sometimes pods of about 20. One pod plays, then another pod joins and the first fades away.

Winds increased to nearly 20 kts, after dark of course. Full mainsail (which is small for this boat), staysail and 70% or less of genoa. Near midnight wind veered NNE to NE and increased to over 20. The waves were big enough to kick off the autopilot so I had to roll up the genoa completely.

Around the Scillys are two TSS, Traffic Separation Schemes, one to south and one on the E. I elected to pass N of the island and pass down on the east side betwixt Isles and TSS. I called Coast Guard to confirm this and they simply acknowledged it was legal according to COLREGS (Collision Regulations). Surprisingly terse. I guess they were busy with the big ships. Luckily there was not much traffic, as it was pitch dark, but at least clear with good visibility.

After the Scillys I turned a little more south toward Ouessant (called Ushant by the Brits), a set of islands just West of Pointe du Kermorvan and Pointe du St Mathieu, on mainland France. Before Ouessant is a huge TSS with busy traffic. It is about 30nm wide so takes roughly 6 hours to cross. There are three major lanes so there is an opportunity to nap in between. Very short naps. My alarm was set anywhere between 4 minutes and 10 minutes. I slept down below to try to avoid hypothermia. It’s chilly out there. It has me dreaming of a pilothouse.

After the TSS it’s best to enter the channel between Ouessant and the mainland from the NW and pass SE from there. Many small islands and shoals, so keeping to the twisting channel is paramount. All this was also in complete darkness, but soon the sun began to rise and I could better appreciate the scene. I couldn’t find a way to contact Douane (Customs) so decided to simply go into the marina in Brest where I could clear in. I was tied up by 0930 and got my Schengen Visa just before lunchtime. She didn’t speak much English so I didn’t get many questions answered, but she was very friendly and it all went smoothly.

This is claimed the oldest yacht club in the world! Very nice place with friendly people. There is currently a funeral going on in the bar, so it’s packed suit-wearing people, so I’m elsewhere sorting out data. I took on 100L of diesel for 90cents/L. I’m happy with that. It was 1.10GBP/L in Oban, Scotland, though last year it was near 70pence/L in Eyemouth as I recall.

Apparently my “Where’s Goldilocks???” link is not updating. It still shows me in Arklow even though when I log on, the map I get is up to date. They seem to be having trouble with their sharing. I hope they get their website fixed soon, but I will continue send my tracks and hopefully you’ll be able to see them soon.

I plan to depart Cork Harbour tomorrow, Wednesday, and sail to Camaret sur Mer. It is near Brest and just south of the farthest western point of France. It’s where I made landfall in 2015 when sailing from the Azores. I like the anchorage except in strong winds from the north. Very picturesque town. Winds should be mostly from N-NE and sometimes pretty strong, 15-25 kts. That could build up some pretty large waves, but It should be a fine trip, albeit cold at night. Nights are 14 hours long now and temp down to 6C. Brrrr. Especially solo when you can’t take off foulies and climb under the covers. There is a lot of ship traffic and that is the biggest hazard. Constant vigilance!

I sailed overnight from Arklow Marina on the east coast to Cork Harbour on the South coast. About 120nm and it took 22 hours.

Departing Arklow at 1000 14 Oct it was very calm, clear and warm in the sun (with two sweaters), but jumbled waves about 1-2m high so rolly. If I had sailed it would have been very unpleasant. No wind to steady the boat, sails flogging, and no headway. Probably backway as the current was against me until after noon. Hence, I motored. and motored, and motored some more. It didn’t get windy enough to sail until nearly midnight. I had set the mainsail just before dark so I could do it with some light, but sheeted very tight. Finally it picked up I was able to turn off the engine. I set the spinnaker pole to extend the genoa in the dark, then made some nice speed, 5-6 knots. Luckily there was not much traffic and after passing a ferry near the SE tip, nothing close, except a sailboat who kept going back and forth across my stern. Almost equal speeds, but eventually he went south so must have been heading much farther west than me. Pretty cold, but dry and just enough wind to sail nicely.

Just before sunset a few dolphins showed up to play in the bow wake. They didn’t seem as playful nor jump as high as some other places, but they swam with me for 10 minutes or so. About 0200 more dolphins showed up and swam with me for quite awhile. No idea how long as I was napping as much as I could, 10 minutes at a time. There was some mild bioluminescence that made their tracks glow faintly, and when they splashed near the bow the red or green light from my sidelights their spray glowed. It was a beautiful thing to see, but too dark for a picture. Sorry! You’ll have to imagine it.

Carlingford Lough (pronounced: Lock). I hunkered here due some south winds coming through that made sailing southward unlikely. Very open harbour, but as I anchored close to the south shore, it was comfortable enough. Beautiful and green, but not good weather for getting ashore. Just paused a couple nights waiting for fair winds. I seem to do that a lot here up north.

A couple very nice fishermen came by a few times checking me out in the time I was there and about 10 hours before I was going to leave, came alongside and offered me a bowl of crab “toes”! Small, and I’m not sure what kind of crab they are from, but I boiled them for 4 minutes as he said, and they were very tasty (with some melted butter and garlic). A nice addition to the menu as I have not had crab claws for a long time.

A little before sunset I motored out of the Lough and headed south. Nice sailing, running downwind, but it got windier and mistier until it had soaked everything. When you are running it blows any mist or rain into the cockpit and down into the cabin. You have to keep it closed up or the salt spray will dampen and corrode everything. It’s hell on electronics. The temperature dropped and I was getting pretty cold. At night I would go below to sleep about 10 minutes at a time, and try to keep the heat from draining out of my body. I really would like a pilot house! They are not so sexy, but comfort is becoming a priority as I age!

By the morning it was getting rough enough with growing following seas that the autopilot could not handle it and would kick off. I decided to go into the marina in Arklow. Hopefully I won’t be there too long.

As I got close to shore the waves decreased dramatically but since I had already decided to go in, and was cold, wet, tired, and hungry, I went into the marina and tied up at a pontoon in the river.