0658 UTC. OK, this is starting to suck. Usually when I look at weather in this area, it has systems, often cyclonic, that move through relatively fast and the wind seldom blows from the same direction. We have had this ENE wind for over 24 hrs. Sometimes it eases and we can fly the genoa, but as close hauled as we can get, we cannot move toward our target.

Plus it getting cold! Water temp is 49F and dropping. Air temp is biting and I’m searching for extra bits and bobs to keep the chill off.

This is one down-side of leaving the Caribbean. It may be a few days before we make it any closer to Falmouth. Saturday we may see the highest winds on the voyage so far, so keep watching!

26 July, 1337 UTC. We made 113nm the last 24 hrs. Pretty strong winds and seas mildly uncomfortable. Food: very simple. Nobody had much desire to cook or eat a lot. Lots of little sandwiches with ham and cheese, raw carrots, trail mix, chocolate. You know, … health food.

Today winds eased and we made fried potatoes, bacon and eggs. Yum. Kind of a community effort, as the first cook got queasy and laid down, then the second cook got queasy and went back up to the cockpit to watch the horizon, then the third cook finished it off as the winds picked up and utensils and plates began sliding more and more vigorously about the counter. Very tasty, and a greater sense of accomplishment than on land.

7/25: Day 2, 1417 UTC. We finally left the dock a little before noon Thur. The first 24 hrs we made about 98 nm…surprisingly good since it was very calm in front of and behind the island. I motored several hours to get out of the wind shadow. I prefer sailing, but 1/2 kt of boat speed is just not enough! We sailed off and on around the E end of Sao Miguel, then pointed N as much as possible.

The best way to catch wind is to sail directly N until latitude 45 N, then turn NW toward England. We had to go a bit E on a close reach until wind backed west and we were able to point N. We made a nice easy 5kts much of Friday thru Sat morning. About noon the wind started to increase to 18-22 kts apparent.

Now we are making 7 kts under 2nd reef mainsail, staysail, and 20% reefed genoa. Seas are picking up 1-2 m and it’s getting harder to move around. Mal de mere has visited the boat. Lucky it was so calm to start as the crew is getting acclimated. Now it’s getting rougher we are re-acclimating. In other words, the grand meals we hoped for with all our lovely, fresh Azorean ingredients are not being made. That’s the catch 22 of a sea voyage; ingredients are best when you are able to cook them, let alone eat and enjoy them. The ham, cheese and rolls are coming in very handy though.
Yesterday a freighter was on a collision course. Madeleine and Simone were pretty excited to hear me call them on the radio and ask them to change course. The man on watch sounded Russian with that deadpan Russian drawl. Pretty routine, and I love my AIS. It doesn’t take much to entertain one out here, even only two days out.

Nice bioluminescense at night. A few birds, otherwise just water, clouds, stars, sun. Hoping for fish and whales, except I hope I don’t hit another one!

I picked up my new crew a few days ago and they have been getting acclimated to the boat. Dreary weather at first but yesterday and today have been beautiful. Ponta Delgada on the island of Sao Miguel is a much bigger city than Horta, and most flights to Azores come in here. It doesn’t quite have the charm of Horta, but i haven’t gotten a chance to explore very much.

Simone and Madeleine are a couple from Belgium. He is Italian and she is Dutch. We’ve been having a great time sampling the cuisine and wine, and they are learning the English names for the parts of the boat and I’m trying to teach them what to expect on the voyage. They have great attitudes and I think it will be a very nice trip. 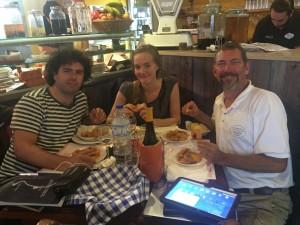 One of the unique things about Horta is that it’s a waypoint at which many boats stop for a respite on their way from N. America and Caribbean, to Europe. Very conveniently located, especially if you are bound for the Mediterranean, Gibralter, Portugal or Spain. As sailors pass through, it’s a tradition to leave some graffiti; a memorial of your trip. Here are a few. Pixie Dust, is that of a friend that stopped here just a couple weeks ahead of me this year. Joe and Dawn and their crew. Joe is a friend of my sister, Krista, and I met him when I was looking for my first boat back about 2008, plus we met up in the Virgin Islands. They are in Portugal now. It’s a small world for sailors!

I climbed up the mast to try to fix the genoa furler I found jammed in Bermuda. It appears something, maybe the spinnaker halyard, had jammed and kept it from turning, when it was rolled in. The result was the bit that holds the top of the sail dented the slot that carries the sail. That kept it from sliding down the foil. Once I figured out what was wrong it was easy to un-jam. Problem is, when mounted I’d have to be at the top of the mast to do it! I think it’s an anomaly, but I’m not finished checking it out.

Anyway, got a nice view, and a chance to work on it. Later I cleaned it up and reassembled it, plus sewed up the chafing on the genoa sail. The mountain in the last picture is the volcano on Pico, 4 miles E of Faial. It’s supposed to be beautiful. 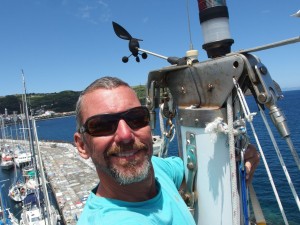 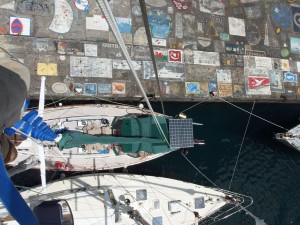 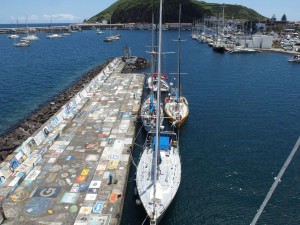 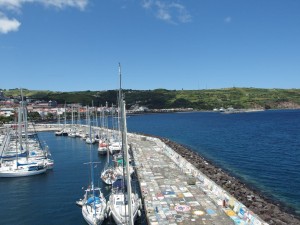 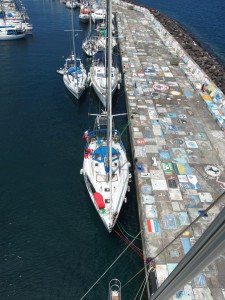 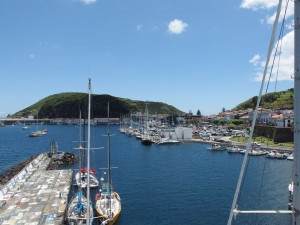 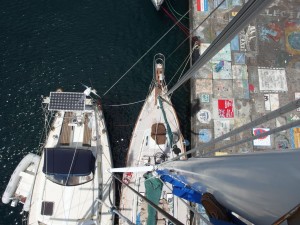 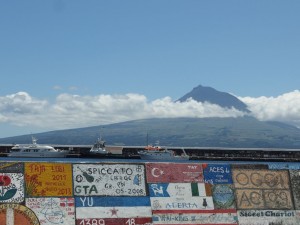 Yesterday we all rented 50cc scooters and terrorized the island. The fun thing about a 50, it’s WOT (wide open throttle), or brakes. We drove up the Caldeira, in the center of the island and hiked up to the peak. I have not climbed much more than the 4 steps up my companionway for 3 years, so was a bit of a challenge. Beautiful view. Lots of healthy looking cattle. Green, clouds, mist, wind, chilly. Then we screamed down the mountain and rode all around including checking out the new volcano. In 1957 a volcano pushed up a landmass just offshore that melded with the island, making Faial a little bigger. It’s still loaded with ash and has very little growing on it. Great sedimentary layers. A volcanologists delight I’m sure.

Then we had a great pizza with Sangria at California Pizza. The owner, Joe came over and we chatted. He lived in California for years and has a house behind Berkeley, and two kids at University there. Many of the Azoreans I’ve spoken to have spent a long time in the U.S. and even speak with near American accents. Seems like a lot of expats live here and I can see why. Very welcoming.

Today Anders and Simon flew out to Sao Miguel, for a short time, than on to Denmark and Spain. I’m on my own again.