We left Sunday pretty late, about 1300 because there was almost no wind in the morning. Just as we came out of the marina there was a huge Norwegian tallship, the Christian Radich that had been docked nearby. She was heading out to sea. Too bad we didn’t get to see her with all her sails set.  We stopped off for 100L of diesel (€133) at Nautico Deportivo, associated with the RCNC, Real Club Nautico Coruña. It was a little cheaper than the Marina Coruña and nicer marina, closer to town. There was still an annoying surge but by keeping the lines loose it didn’t bother Goldilocks much. 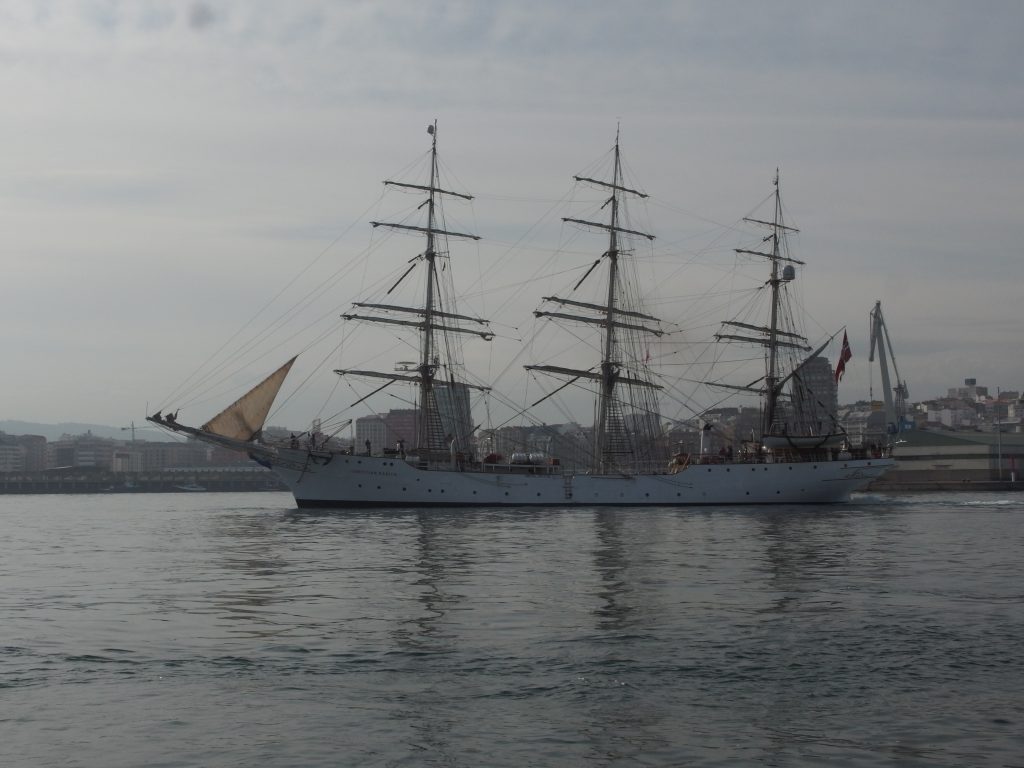 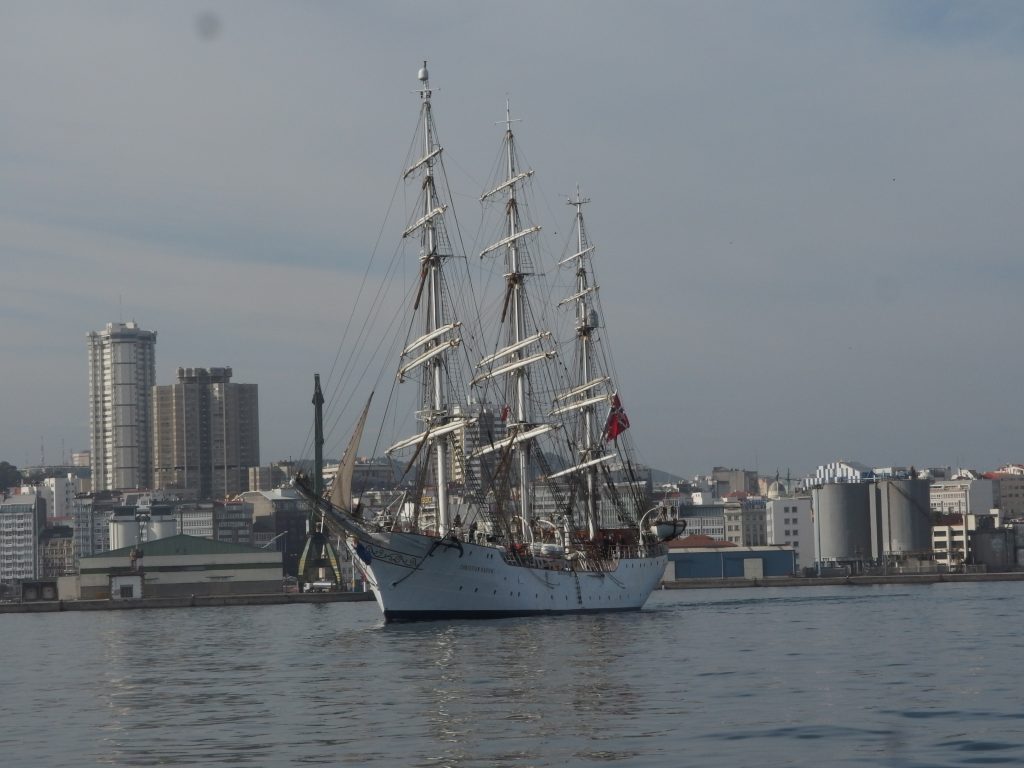 About 1400 we had her filled up and headed out to sea. Light winds to start but that built up pretty soon and we had to roll in the genoa halfway and all the way soon after. That was after we had passed Sisarga Grande, an island that sticks out a bit. After that we could turn more south and were running dead downwind. The winds picked up as did the swell and we had nearly 20-25 gusting 30kts and swell about 4m. They were getting pretty steep and the autopilot could not handle it even before Sisarga Grande. Jean started steering and he did a great job. It’s all about the feel of the boat and getting the rudder over just as the wave starts pushing the stern over, and keeping her perpendicular to the waves. 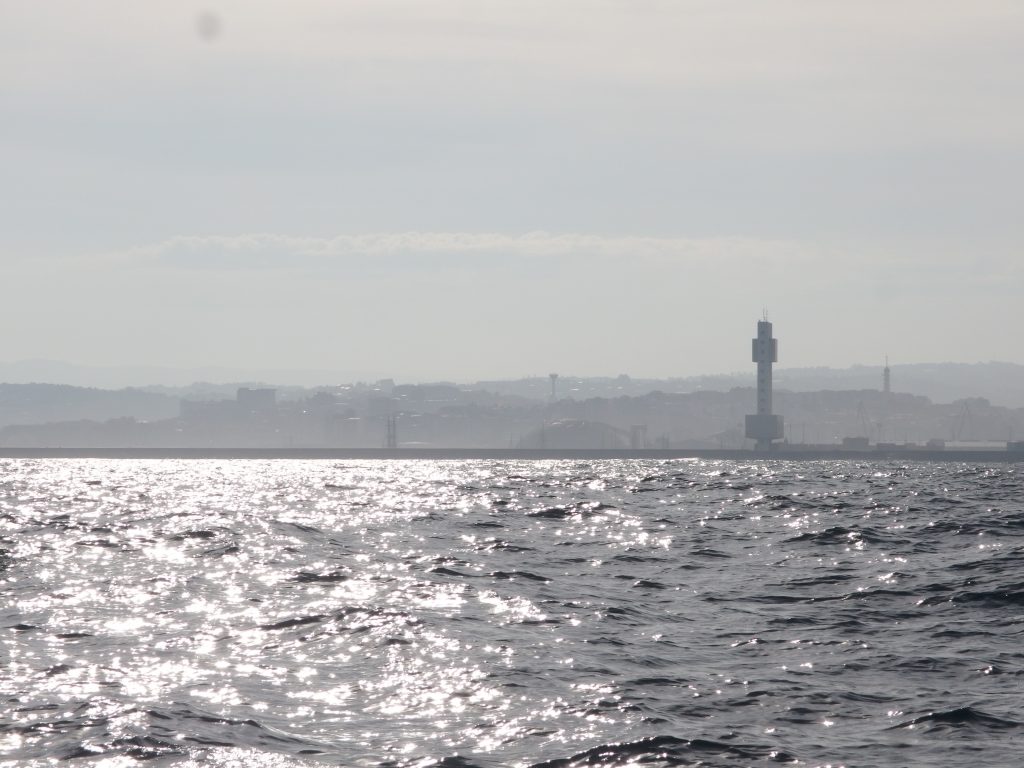 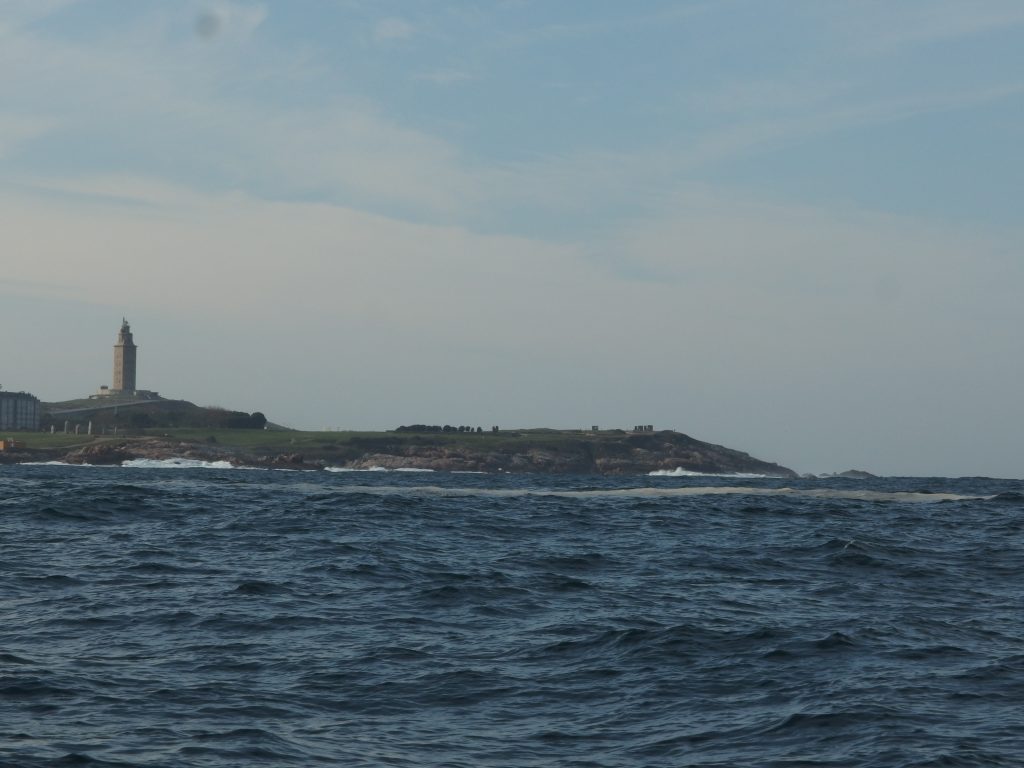 We surfed down the waves as they passed us and we often exceeded 9kts and even broke 10 once. We must have been averaging 8 kts through much of that time. The water turbine is on a long rope and as the boat speeds up it puts a major twist in the line, then runs at a much higher speed making a strange whirring sound. Jean spent some time looking for the Emperor Penguin that it sounds much like before he figured out where the sound was coming from!

We had been very lucky that the sky was clear and the moon was about 3/4 and shining brightly enough to see the waves pretty well. The wind was forecast to lighten in the late afternoon. It did so about 9pm, just in time since we were approaching some shoals where we needed to be able to maneuver and get off the perpendicular-to-waves course. The waves got a lot less steep after that and steering became easier and the risk of broaching much less, so the timing was perfect. We also slowed down to about 5 kts or less. After passing some fishing boats pitching in the big waves, we passed between shore and a large shoal that had huge breakers on it. The sea we passed through was covered with spindrift from the breakers. It reminded me of why I rarely go into an unknown harbor at night. We motored the last mile or so and dropped the hook just near the small town of Camariñas, cooked some soup and got some much needed sleep. With a well-found boat, good crew and some luck we had a great transit. Tomorrow no wind, so we’ll sit at anchor. Hopefully depart Tuesday for Muros about 39nm further south.