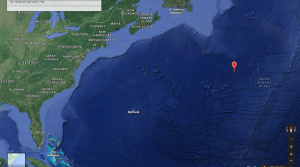 We passed the halfway point between Bermuda and Horta, Azores this morning. I made stir fry chicken for a celebratory dinner! We’ve been eating a lot of pasta lately and the natives are getting disgruntled. I have a book “365 Ways To Eat Pasta” and Simon and Anders are slowly working through it.

By the way, Alton Brown on “Good Eats” says to salt water for pasta “about the same 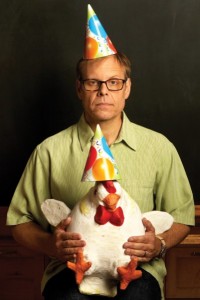 as seawater”. I’m here to tell you that is way too salty. In the Bahamas 50% seawater was good. I think Virgin Islands was about the same, though I didn’t use seawater much there. Here in the middle of the North Atlantic Ocean about 1/3 seawater is still too salty. Sorry Alton, you missed that one.

We’re not measuring accurately so this is a rough guide.
Wind is dead calm now, after some pretty vigorous sailing. When the boat started to spin around and I couldn’t tell at all where it was coming from, I dropped the spinnaker and started motoring. With luck we’ll find some wind. We won’t motor more than a few hrs.

Saw more dolphins at sunset with some little ones zooming back and forth. We were moving too slow so they didn’t stick around for long. I always love seeing them. No whales yet. No fish either. I dragged lures all day. No bait so didn’t expect much and was appropriately disappointed.

Tomorrow forecast calm again, so another mellow day. The waves should drop as well so a good day to work on stuff. Today as we were putting up the spinnaker I saw a pin was just about to fall out of my genoa sheet block. The locking screw had sheared off. Very lucky I spotted it, and it was a calm enough day to easily fix it. Drives home yet again the importance of inspecting the rigging frequently.

We have a sliver of moon again, but it goes to bed shortly after the sun, so we don’t get light for long. With the clouds we’ve had lately it can be pitch black. Sometimes, a little disconcerting. Otherwise – beautiful. Great stars when it’s clear.

We made a sacrifice to King Neptune.  Several days ago now, a mesh bag of onions tied to the bimini frame just disappeared, as if a great hand reached up from the sea. They had been a little rotten and we’re being aired out. I hope the King enjoys them. Produce in the VI is not the greatest but the onions are going bad faster than usual. The potatoes started sprouting right away too. We’ll manage.

With careful rationing, and ruthless guarding, the chocolate is holding out. That’s what’s important!

One thought on “On Alton and Neptune…”